This has been the summer of biking in our house.

We've worked hard with our "littles" to teach them how to ride bikes. It's paying off.

Little M-man, my 7-year-old, is now able to pedal in short spurts. A little dude who struggles with confidence sometimes, he was beaming Saturday as he worked with his big brother and was actually biking on his own.

His 5-year-old sister C is tearing around on her tiny pink bike, demanding to go farther than the sidewalks near our house. She wants to bike with mommy, whose nagging running injury has prompted her to bike more.

I love that girl's spunk. 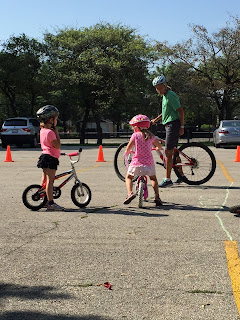 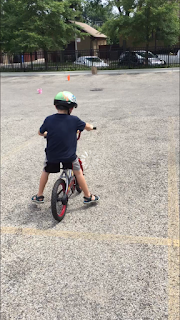 Sometimes I wonder if the world is getting crabbier, or if as I age I am viewing the world through a different lense. It seems so many people are unhappy or angry sometimes, and grumbling is a reflex. I'm certainly guilty of it.

I was recently walking on Michigan Avenue, which teemed with people on a warm September afternoon. I wondered how many of them were crabby. I pictured them as cute babies instead, to see if my lense of humanity would be kinder. I decided to picture them as five-year-olds instead. Kids that age are the bomb.

Long before I became a runner, I biked. My introduction to biking as a kid was far from remarkable.

I had a pink bike with a pink striped banana seat (I LOVED that bike). Back then, we didn't wear bike helmets. My dad will still laugh about how many times I crashed into garbage cans trying to learn. It seemed to take forever. (God, it took forever...)

But then biking became fun, super fun. It meant big-kid freedom to wander. Sometimes, as I got older, it meant peace, a chance to collect jumbled thoughts, whether it was my bewildered eighth grade self on military base housing streets in Omaha or my troubled new mom self, back when my oldest son was born, on a little used trail east of Des Moines.

I vowed that this year would be the summer that my kids would learn to ride -- and hopefully, learn to love biking as I did. And that has been so great to work with them.

It's also been great to re-discover biking for myself and remember why I loved it so much.

Yesterday morning, I had planned to do another of a series of rides I've been doing on the weekends lately along the North Channel Trail, which runs thru a chunk of the North Side of Chicago into a bunch of suburbs, eventually reaching the Green Bay Trail that starts in the tony suburbs of Wilmette, Kenilworth and Winnetka (which, at ~20 miles round trip from my house, is as far as I've gotten).

But M-man was up in the middle of the night. He is usually a great sleeper, but he was barking-coughing and crying. Poor kid was miserable. I stayed with him until he could sleep again, so I didn't get up as early as I would have liked to get 25 miles in (that was my goal).

So, by the time I got up and fed the kids, I had an hour or so to squeeze in a ride before a kids' birthday party. I decided to bike west from my house, along some more bike-friendly streets, to the North Branch trail, where I've done plenty of runs.

Given the time constraint, I knew that just as I reached the Caldwell Woods, where the awesome paved bike trails began and wound north that I would have to turn around.

But hey, a ride's a ride. And it was a beautiful fall day.

And then I discovered something awesome.

The biking path has been extended south of Caldwell Woods to Cicero and Forest Glen roads, easily accessible from bike-friendly Bryn Mawr Road.

The construction/do not enter signs were still up, promising $500 fines for trespassers, but the path had plenty of scofflaw bikers and walkers already.

I joined them. A new path is just irresistible.

I giddily biked up to Caldwell Woods, my turnaround. I wanted to split myself in two -- send one mom back to do all the mom stuff at my house, and the other part of me keep biking, wind in my hair.

The rest of the day, I thought about that ride. I got grouchy about stupid stuff at a few points in the day, which I feel silly about, and reminded myself to think about the things that make us happy. If I'm grouchy, even if I can't go for a bike ride that second, maybe just thinking about that feeling can help pave over the grouchy moment.

Yeah, it doesn't always work. But sometimes it helps.

I so cannot wait to take the "littles" up to that path for a ride!

Biking has been the silver lining to what's happening with my favorite physical activity, running. Unforunately, my hamstring tendon/hip issues are still there, a good seven-plus months and counting. I can run a few times a week, but my hamstring feels stuck.

Back to the sports doctor this week. Never give up, right?
Posted by Tammy at 7:06 AM