While 40,000-plus people ran the Chicago Marathon last weekend, my running buddy Shaun and I had planned to run a great marathon trail race instead, the Des Plaines River Trail (DPRT) marathon. I've run it before, in 2018 and in 2015. The race was amazing in 2015. Three years later, the course was flooded (which some trail runners love) but I found it pretty tough. I wound up throwing out my back and a bleeding foot. My running buddy Shaun and I had already made a pact to skip DPRT if there was flooding again on the course.

Soooo when we saw the course conditions for DPRT were similar this year, just days before the race, I was already googling Midwest marathons for Saturday, Oct. 12, while Shaun was returning from vacation in Munich.

As soon as he landed at O'Hare, he had texts from me telling him to look at two Wisconsin marathons, both 6-7 hour drives from Chicago,the Gandy Dancer Trail Marathon in Luck, Wis., and the Whistlestop Marathon in Ashland, Wis. They both are trail marathons on old railroad beds, and both looked pretty great.

To me, it was like deciding whether to eat corn on the cob with my hands or using those cute little corn holders. It's still corn no matter what. And, in this case, it's still a trail marathon a long drive away.

(Side story: my neighborhood has a "freebox"  Facebook page where neighbors can give away stuff they don't want  to other folks in the neighborhood. A woman over the summer posted corn holders that were still in the package, brand new, and I was like, "yeah"! My husband was incredulous that I drove all the way to someone's house for corn holders. How could I not?! They're so cute AND functional.) 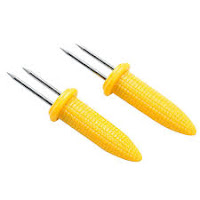 Ultimately we picked Gandy Dancer because it was one hour closer and it had snow in the forecast, whereas the other spot had 40-degree temps and rain in its forecast. I'd rather run in snow than rain. I had to google Gandy Dancer, which I learned is a old-timey term for a railroad worker.

Then there was proposing this impulsive idea to Brett. My husband, who is not an impulsive guy, was pretty cool about it, though he did (nicely) ask, "can't you just run in some puddles? Do you really need to go so far?" Fortunately he is used to my crazy.

We left Chicago midday Friday, with Shaun arriving to pick me up in not the compact car he planned to rent but a full-on minivan. He's single with no kids, so it was pretty funny. (I quickly realized that man, vans have a ton of room!)

As we drove north of Madison, Wis., the landscape and foliage became more colorful. Fall had already settled in up here and we oohed and ahhed as we continued northward. After dark we saw the hint of the freakishly early-in-the-season snow we'd seen in the forecast that week, flakes dancing in the van's headlights. We wondered about the clothes we brought to run in, and hoped for the best.

A stop at a local bar & grill in Balsam Lake for a pre-race dinner, and then we headed to stay the evening in St. Croix Falls, Wis., which only the next morning did I realize was on the Minnesota border. I guess I don't know my northern Wisconsin geography.

The next morning we got up early and saw trees swaying in the dark. It was 29 degrees. It's not that I can't run in that kind of weather, but I sure hadn't done it since last winter, and struggled mentally with the idea that I'd spend five hours running in that cold and wind. Fortunately, I had packed aobut four different running gear combos and settled on tights, long-sleeve, light hoodie and windbreaker vest.

The start line was at the Luck Fire Department. It was still super dark out when we arrived at 6:4 a.m. to check in. One of the race volunteers, who I assume was a fireman, asked if we want to join a few runners to start the race an hour earlier than the 8 a.m. start. Considering we typically start runs as early as 4 a.m., we were game for that. Everyone was so friendly, and we had a few people who were incredulous that we were skipping our hometown marathon -- one of the largest in the world -- to run a tiny race in northwest Wisconsin.

To us, it made perfect sense.

This is the dark start line below, with eight marathon runners and firefighters wisely wearing Carhartt gear head to toe. We could barely see. The other 25 marathoners would start an hour later, as would other runners doing shorter distances. 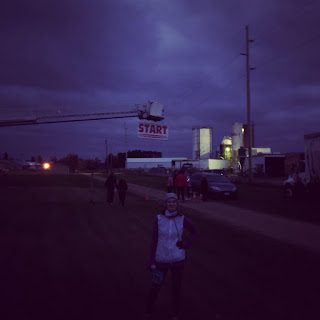 The race was, in my mind, can be divided into two parts.

The first 13 miles -- 6.5 miles south and back to the start -- were beautiful. Snow softly blew, dusting the trees lining the crushed limestone course (an old railroad bed, thus the "Gandy Dancer" name). Those trees also blocked some of the wind.

A super friendly woman, Nicole, and her husband Andy, who was biking alongside of her, immediately struck up a conversation and made the miles tick by. They were from Minneapolis, where Nicole had just run the Twin Cities Marathon the previous weekend, and were awesome to hang out with. Andy even biked ahead to an aid station at one point to find a bandage for a blister that was forming on my heel. Minnesotans are always so nice, in my experience.

The second half of the race was harder, windier, and felt colder. My body was definitely aching and I  and I couldn't feel my thumbs for awhile. Nicole and I kept passing and catching up to each other, as we each took little walk breaks, and asked if I needed company. My brain told me to grind it out in silence as I struggled with nausea and how tired I was starting to feel, so I thanked her and said I was OK.

The closer I got to the finish line, the harder and colder the wind felt. Shaun was ahead of me the whole race, since he's a lot faster. I hoped he was having a good race.

I finished more than five hours after starting, taking little walk breaks here and there and telling myself "who cares how slow you finish?!" The snow was blowing sideways and hard during the last few miles and I felt lightheaded and cold crossing the finish line. I was also disoriented because the start/finish line looked different in daylight and I didn't know where I was supposed to go after I was done running. I eventually found my way back to the fire station and laid down on the ground with my legs up a wall for what felt like a really long time.

Cheering me up after the race were the results. Because there were so few marathon runners, I came in 4th overall out of 11 women and won my age group 50-59 because there were only two women in that age group.

It's like when someone tells me I look good for my age -- I'll take it.

I loved this race, despite the challenges. I live in Chicago and yet love to go to the country as often as I can, whether it's a weekend or a race. Thank you to all of the awesome volunteers in Luck, Milltown and Frederic who cheered us, gave us handwarmers and homemade pumpkin bread.

Thinking about Whistlestop next year...