It was windy and snowing sideways. I was nauseous, cold and tired of running, more than 20 miles into a marathon, the Gandy Dancer trail marathon I ran last month.

No way I'm going the Lakefront 50K in three weeks, I thought, thinking about a race I'd been toying with in my mind over the summer. I can't wait to stop running, I thought. One foot in front of the other. Uno, dos, tres, cuatro, cinco, seis, siete, ocho, nueve, diez, once... sometimes I practice counting in Spanish when I'm running. Weird, but it kind of helps.

Three Saturdays later, I got up at 5 a.m., butterflies in my stomach. It was two days after a freak Halloween snowstorm. My 10-year-old son was sick. I had a fight with my husband the night before.
My head was jumbled, but I knew this: I had been thinking about this race for weeks and nothing was going to stop me from running it.

And it was great.

It was overcast and in the 30s before the race began. The sky's color matched my mood and resolve to run the shit out of this race. I took a photo of some ducks in Lake Michigan and walked by the sparsely populated start line to pass the time before the start. 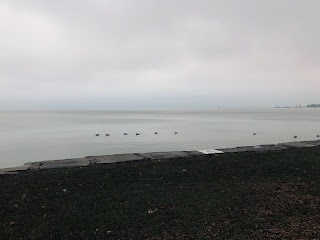 This race has two distance options, 50 kilometers (31 miles) and 50 miles. Folks running the 50-miler had started running at 6:30, two hours before my race would begin. The 50K course consisted of three loops, starting at Foster Beach on the north side of the city and running south to North Avenue Beach and back.

There were aid stations at the beginning, the turnaround point and midway, near Recreation Drive, so about 2.5 miles apart, which was great.

Loop 1: I was solo, and that was good to shake out all of the negative junk. After turning back at North Avenue, I ran north a bit and saw something very odd. A man well into his late 70s, but more likely early 80s, was completely disrobed, except for old-timey fitted, high-waisted royal blue bathing shorts. He otherwise had nothing else on -- it was about 32 degrees -- and he rubbed his hands across his creamy white arms to attempt to warm up. I ran past him and kept looking back, and he actually walked in the water and began swimming. A guy with him, also older and fully bundled in a parka, watched him. It was weird.

About another mile and a half north of there, I see this guy walked and think, hey, that looks like my friend Oliver, who's married to my co-worker Jeff. Then I notice Jeff's with him. Jeff has one of those incredible, magnetic personalities and is a hoot to work with. I was so excited to run into them. "What are you guys doing in the middle of my race?" I yelled at them. We hugged, laughed and posed for selfies. I was smiling when I left them.

I kept my pace slow and took several-minute walk breaks at aid stations, something I usually don't give myself permission to do. But I had the Gandy Dancer marathon on my mind, and how much I struggled with nausea and fatigue, and I wanted to have a better race today. So far, my strategy was working for me.

As I neared the end of the first loop, I began looking for my friend Krista, one of my very favorite people in general and definitely a favorite to run with. She had graciously agreed to run the second loop with me. The second loop went by so much faster, talking and laughing about stuff. Even when we weren't talking, it was a comfortable quiet between us. I just love running with her.

At the North Avenue turnaround, where there was an aid station with tons of yummy food (ultramarathons are stocked very differently than your typical road marathon race), there was PUMPKIN PIE. OMG I love pumpkin pie and it sound especially amazing at that moment. I yelled at Krista "they have pumpkin pie" and she laughed at me.

Not wanting to get nauseous later, I kept myself to half a piece of pie. Yay, self-restraint. We headed back north.

As we neared Foster beach, the idea of a third 10-mile loop felt a little dreadful. I kept doing quiet mental checks. Was I tired? Not too bad. Was anything hurting? No. Even my lower back, which always tightens during long runs, wasn't too bad. Was I nauseous? No. I told myself, it's just the mental part here that is the hardest. You can do this.

Krista asked me if I had iPhone headphones and since I didn't, would I like to borrow hers? I seldom listen to music running because it can kind of annoy me after a while (my music-loving husband would not understand this). She suggested a podcast or audio book and I was like, great idea!

At the end of the second loop, we hugged and she was on her way to get her mom from the airport. Her mom is as awesome as her.

I decided to take a little walk break to start the third loop. As I walked, I realized I had no idea what book to listen do or really even how to download a book since I'd never done that. Sheepishly, I text Krista for a suggestion. I loved how fast she answered, suggested a couple of options. I picked "I think you should talk to someone" by Lori Gottlieb, a therapist who goes to therapy herself and talks about therapy and people. Fun fact -- prior to going to medical school and ultimately psychology, she worked in television, launching at the time little-known TV shows ER and Friends.

I'm not doing the book justice -- this book is so great. And it was perfect for my jumbly mind. I listened to 10 chapters that final loop, grateful for running, my friends and this great book.

I stopped at what would be my last mid-race aid station stop at Recreation Drive, feeling good vibes. I felt good mentally. Physically, I was glad to feel how I should feel, tired, but with no major issues. I walked a bit more, and stopped to toss my paper cup into an open garbage can. I jumped when I realized I tossed the cup on top of an animal, likely a possum, that was curled up in a ball at the bottom of the can. It looked like he/she was trying to stay warm. I could see it breathing, its furry back moving up and down. Yikes!

I ran/walked the rest of the way. As I got further north, I got more excited. This was the third 50K race I've done -- I did the Paleozoic 50K races in 2014 and 2015. It was the first 50K for me since hip surgery in 2017 and since turning 50. I recovered nicely from surgery, thank goodness, but still, to do this just made me feel badass. Ultras, in fact, attract an older audience, with people my age and older running 50- and 100-mile races, so to run 50K at my age isn't actually that remarkable in the ultra world.

But I was still glad -- as I get older, I work harder to not compare myself to others and drag myself down with negative thinking. I wished I had been better about this when I was younger.

As I neared the finish line, I was smiling. I happily crossed the finish line at 6:40 and change, about 30 minutes faster than my fastest 50K (which, in fairness, was a hilly trail race and this was a flat lakefront race).

I was craving a Coke Zero, and stopped at a 7-Eleven on the way home. I forgot for a moment I was still wearing my race medal and race bib, and walked toward the store. I said hi to the grinning homeless woman in front of me and asked her if I could buy her something to eat. She asked me if I was a superhero and we both laughed. I filled her order -- a hot dog with nothing on it -- and a coke and gave her a little hug.

It was a good day. 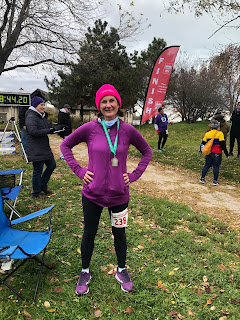