When marathons and 50Ks were cancelled last year because of COVID, I told myself that it would be good to take a year off.

But I had a little itch that I wanted to scratch.

My running partner suggested this winter signing up for the Milwaukee marathon, originally scheduled for this month but now postponed until fall.

Still wanting to scratch that itch, I checked then to see if the Lakefront 50K was happening in March. It was -- on March 27, two days before my 53rd birthday.  Cool. I registered.

Training was a challenge. February was one of the snowiest in Chicago in memory. I am lucky to belong to a gym by my house, but COVID limits how long you can be at the gym per session to 90 minutes, so I wasn't able to bang out long runs on a treadmill. (Not a real problem, I know.)

I managed to sneak in shorter runs here and there and got all of my long weekend runs in somehow, including splitting them into sessions at the treadmill and running the rest on snowy streets. One day I took a half vacation day from work to get in a 16-miler.

As race day neared, I figured I would be undertrained but I would finish. If you want to stop reading here, I accomplished both.

The course this year began in the pretty Jackson Park, located along the lakefront on the South Side. The less exciting part is that the race was five roughly six-mile loops north on the lakefront path and back.

(The good news was the aid station at the start/finish line, staffed by the Flatlanders Ultra Group. A woman Linda recognized me, despite the mask, and we quickly caught up. She is so nice and upbeat every time I've met her. And with every loop, when I grabbed a cookie or pickle to eat, she kept telling me that I was doing great and looked strong. So grateful to her and the crew there! Also, real Coke, fig newtons and pickles during an ultra are delicious).

Mentally I knew the five loops would be really tough. I've run the Lakefront 50K before, back in 2019 when it was three 10-mile loops. I figured I had a good plan for this race -- a friend said they would run a loop or two with me; I'd do audiobook for some of the other loops, and I'd be fine.

Race day morning was cool, in the low 40s with a chance of rain. The weather would play around the next six-plus hours, from sunny to foggy to sunny to overcast to warm in the 60s. I went through three different outfit changes. 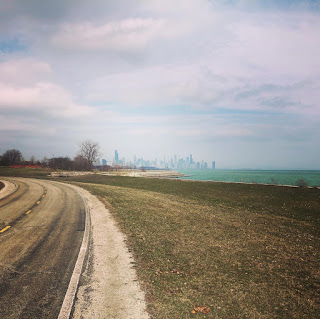 At race start time I learned that I'd be doing the race solo, so I mentally hunkered down and began slowly. The first two loops, I told myself, I'd just take it all in. By that I mean enjoy the views, study the path, run around the beautiful Promontory Point (when you do five loops, that means I'd be running Promontory Point 10 times, oof), scour the lakefront/running path erosion from the last winter.

By the end of the second loop I was ready for a distraction. I tuned into the audiobook I had already begun listening to, "Just As I Am", the autobiography of actress Cicely Tyson. A co-worker had previously suggested the book and started a book club, so I was half-way through already and thoroughly invested in listening to Cicely's life story.

As I was listening to the chapter in which Cicely had reunited with her love Miles Davis, I saw my awesome neighbors Jack and Megan with their three cute-as-buttons little girls, waving and holding a homemade "Tammy Turbo" sign. I was probably 14 or 15 miles into the race and starting to think that it sucked, so the timing of their presence was perfect. We chatted and did some fist bumps. It was what I needed.

After I said good-bye, I went back to running and listening to the book narrator. Miles was in very rough shape from drugs and Cicely took charge of his recovery. As I ran, I listened how she took him to a Chinese medicine doctor who predicted that he only had few weeks left. She was so loyal, all the while making movies and TV shows. I had no idea how prolific she was in her career.

She talked about being cast in the 1977 TV series "Roots", which I watched as a little kid and still remember how it took my breath away. For those old enough to remember the series, the network was actually worried about how it would play with white audiences, which is why they aired it eight nights straight rather than stretch it out in as many weeks. Good grief. I still think about that.

As Miles' health gets better, he convinces Cicely to marry him and they do so at Bill Cosby's estate. As I ran one of the Promontory Point legs, I heard about how a special family ring vanished from Cicely's room and mysteriously reappeared after the ceremony, and her interpretation that her deceased mother was telling her something.

As their marriage eventually unraveled, I was on the fourth loop and tired. I studied the high-rises and landscape along the lakefront, mentally willing myself to run to that next building or breakwater.

By the start of the fifth loop, I had abandoned my windbreaker, vest and long-sleeve shirt. It was getting warm. I ran to my car (it was literally like 50 feet away from the start) and grabbed the short-sleeve race shirt we received that morning. Thank goodness I had it.

The final loop I took a break from the book, but continued to think about Cicely. I admired that she said she chose to remember Miles as her great love, instead of only the bad stuff at the end.

I decided I would play music that final loop, which I usually never do. Some old Pet Shop Boys did the trick, and I was able to mostly run (epically slowly) to the end. I was also getting nauseous, which is something that happens a lot in my races. I overheat really easily.

When I crossed the finish line, I felt happy, if a little pukey. I immediately laid on my back in the grass and stared at the sky. It felt amazing.

I don't know my exact time but it was something like 6 1/2 hours. I finished. Who cares how fast? I used to, but I don't anymore. This was my fourth 50K race and I just felt good about running and finishing it.

A week later, I finished the book. I recommend it -- it's amazing. 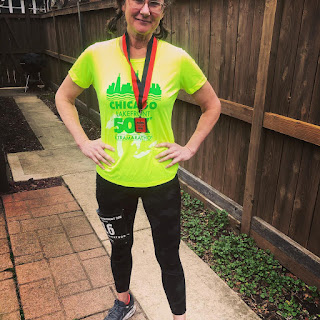