Running like a girl -- or maybe because of one -- race reports!

At the risk of sounding insufferable, my running has been awesome lately. I don't often feel like I'm kicking ass in life, but man, there is something pretty cool going on in runlikeamama world.

I ran a 5K a weekend ago and a half last weekend. And PRed in both, 13 1/2 months post-partum. My running got faster after my little 3-year-old son was born, but since my daughter Baby C was born? Man, there has been plenty written about evidence that pregnancy can actually help mommies run faster then before they had their babies. But is there any evidence that having a girl really makes you faster? I like that idea a lot, even if it has no merit.

Ravenswood 5K: This is my neighborhood, which is one of the best places on earth. It's filled with Obama-loving families with little kids who support local business and who know each other, which is cool in a big city like Chicago. So this is my race. I was ready to race it this year, really race it. I had a personal record of 27:01 to beat from last fall. I met my friend Nancy at the race that morning who was all, "oh, you'll beat that." I hoped I could matched that optimism.

The first mile I just shot off like a cannon. I don't wear a Garmin but run on feel with a Timex ironman watch on my wrist. Mind you, I don't know how to work all the fancy functions on my watch, but it has a seconds counter, which helps me guesstimate my pace as I reach a mile marker. The first mile marker I hit  a sub-10-minute-mile pace, but it didn't seem like by much. I was annoyed and kept thinking that I was running faster than that. So I kept pushing my pace hard, telling myself it was only three miles, and focused on runners ahead of me that I could pick off. By mile 2 the clock read 17 minutes and change. Holy moly, I could chill a bit and still PR today, woohoo! That first mile clock must have been messed up a bit because I did not run a sub-8 mile that second mile. But, hey, it's a race and you're supposed to RACE and see what your body can do. So I pushed and pushed and crossed the finish line below 27 minutes. I found out my chip time was more than 90 seconds better than my PR for a new PR of 25:24, a pretty sizable improvement. I was all teary at the finish line. I can't help it, I still choke up at finish lines sometimes. I can't believe I became a runner or that I'm getting faster. It feels so good to get better at something and see measurable results. If only regular life gave us that, you know?

So, that was that. I posted all over Facebook and my awesome running friends were bananas with me. God love 'em.

So, my 5k results over the years:

Then, a week later was my half marathon. I was twitchy to beat my best time of 2:09:22. And I had a secret weapon -- my friend Margaret. I've joked with Margaret that she is my running twin. She's intense, competitive, wickedly funny and a great running partner. And, it turns out, freaking awesome to race with.

We did the Southwest Half Marathon in the burbs. Since I live in the city, I'm spoiled and have my pick of races, even half marathons. Which have become my favorite distance to race. You have to train for them, but they don't take over your life like marathon training. Anyway, I am tired of large city races that cost too much money (some halfs now cost $100!) and have 10,000 people or more running them. Palos Heights was a nice-sized race at 2,500 I think (smaller than my neighborhood 5K!) and was just right.

Margaret and I ran with friends at first but really just wound up running together. The first 9 miles were spent gabbing our brains out and making sure we were around 9:30-minute miles. I felt fantastic. The tree-lined course was softly hilly, enough to work you but not kill you. It was 50's and overcast to start, great weather. at mile 9-ish she suggested we each pop in an iPod earbud and conserve energy. I knew I was in line to beat my best race time, set last fall (again, post baby girl!) and was agreeable. Justice and Kanye West kept my legs and head in the race. By this point we were running into a headwind, the temperature was rising and the sun came out.

Then something happened after mile 12. The muscles in my midback and front torso felt like a vise grip around my mid-section. My breathing felt shallow. I was tired. There was a respectable uphill climb and the sun felt hot. I tend to run hot, meaning I can feel nauseous and overheated running on a 55-degree sunny day, so I thought, uh oh. My right hip was saying hello there! But my muscles otherwise didn't ache -- I drank a boatload of water the previous day, which I am terrible about doing, and I think that helped.

I kept mentally telling Margaret to go ahead, I wouldn't be far behind. She instead non-telepathically yelled at me to keep going, we were going to be under 2 hours and 8 minutes. Oh yeah,baby. I got goose bumps, even though I was hot. I got that rare and lovely runner's high, where you feel fricking invincible. I thought of dodgeball as a kid and how I got picked on for being slow, or a girl, and being told I was clumsy. Oh yeah? I swear, it was like some internal force was pushing me out of sheer emotion and desire to show an imaginary person what I was made of. I know this sounds completely nutso, but races are crazy things. Many of us spend our lives being so careful and methodical, or careful, or we seek the easiest route -- racing, really racing, is the opposite. It's gutteral and human and all out. Push it, push it, push it, girl. You can do this and shut up to all of those idiots out there who say otherwise.

Well, I thought I was going to fall over crossing the finish line, as this photo suggests: 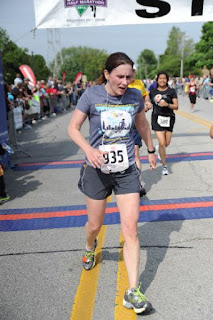 But I didn't, and I ran my best half marathon of the 11 I've ever run  -- since my first one in 2007 -- and ran that bad boy in 2:07:12, beating my old best time by more than two minutes. A thousand smooches to Margaret and my running buddies for all of those collegial training runs at o'dark thirty hours leading up to these races.

My self-indulgent half marathon list of times over the years: