A year ago this week, the same week the 45th president was inaugurated and determined women marched across the globe, I had my first running-related surgery.

I had a hip arthoscopy to repair a torn labrum and to shave my thigh bone, to eliminate bone spurring and get it to fit right in my hip socket again. (Dr. Shane Nho through Rush Medical System, for those wondering. He is fantastic.)

Right before that surgery, I did a race that is one of my annual favorites, the Frozen Gnome 10K/50K in Crystal Lake.

It is wicked hilly and stunningly pretty, and known for "buttslide hill", which is exactly what it sounds like. Every year I do the 10K and am sore for days -- the 50K is five loops on that terrain, and I admire the runners I see every year who do the whole thing. I also wonder how they can move the next day.

As I ran it just prior to surgery a year ago, my hip customarily ached deeply, as did my lower back, groin and the inside of my thigh. Despite how much running had come to frankly suck by then, I was optimistic about my surgery.

I wondered to my friend Shaun, who himself was rebounding from injury and starting to try and lose weight he had regained during injury, what this race would be like a year from that day, meaning this year.

Welp, Shaun and I both had an awesome time and awesome race this year. 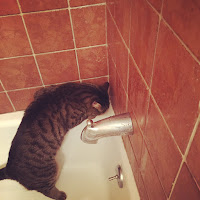 Our usual Frozen Gnome crew carpooled from the city -- Krista, Shaun and Lindsay, who moved to Minnesota this past year but made sure to be in town for Frozen Gnome. (Yeah, we REALLY like this race so much that we're willing to cross state lines)

Another of our running friends, Terri, joined us this year. Aside: Terri fosters cats and gave me my awesome cat, Reckless, who we adopted four years ago this month. Here he is, licking our bathtub. Ick.

Crystal Lake is a pretty good haul from Chicago, at least an hour's drive in no traffic. It looks like it belongs in Iowa somewhere. Since it's a long trip, we spend the car ride every year discussing incredibly timely topics like the temperature at the start (this year it was 4 degrees. Since it was above zero, we're like, cool!).

There's also the annual speculation of how bad the ice will be on the course this year, how many pairs of socks and tights we're wearing, how many shirt/layers, which hat, which neck buff, etc.

(This year: Blue winter running jacket, windbreaker vest, Icebreaker wool shirt-- these are the bomb -- thickest tights in my possession, one thin and one thick pair of smartwool socks, and trail shoes. Other than my butt, I was pretty warm once I was running).

After previous years of deep snow, slush and icy -- we were surprised to see no snow and no ice. A freak thaw earlier in the week, when our temps got to almost 60 degrees, eliminated everything.

The start line consisted of runners, lots of them ultrarunners ready to run 50K, jumping around to stay warm, as some with a bullhorn counted down and a Journey song got blasted as we started running. One guy grumbled that this was the song that the White Sox ruined when they won the World Series in 2005 (Don't Stop Believin').

The ground was dry and frozen into uneven ruts. The trees were naked and bathed in sunlight. It was just gorgeous.

And I felt good, even with ice in my hair and on my eyelashes. I panted up and down hills I'm not used to running, but it felt good to breathe hard and struggle.

And it felt good not to hurt in a bad way.

I met a couple of Flatlanders, Holly and Stormy, along the way (an ultramarathon group named for Illinois' flatness in a good deal of the northern part of the state). It's fun to recognize someone on a course I've seen on the Flatlanders Facebook page or from the Strava app.

Stormy wore his daughter's white bunny-eared hat as a reminder of her, after losing her. His story isn't mine to tell, but man, I have thought of that hat a lot since the race. And I hugged my littlest ones a little extra when I got hom.

The rest of the race was a maze of steep hills, bare tree trunks, hard rutted ground and sun. Buttslide hill was snowless, so it required manuevering down the terrain like a crab, like gym class in grade school.

The rest of the story consists of meeting up in the warm car afterward to swap race stories, *maybe* someone flashed a running bra at someone, and hitting Starbucks for a satisfyingly large coffee.

How do you run in  the winter? Easy -- find friends like the few hundred who love running Frozen Gnome and other trails in every kind of weather. They're out there, and they make getting out of bed and bundling up worth it.

My friend Shaun has lost a ton of weight and gotten into amazing shape. I can barely keep up with him running. He had a great race, finishing way ahead of me. I'm so happy for him. I love a good comeback story.


Next up: Indoor triathlon this week.

"Tammy" and "triathlon" are seldom mentioned in the same sentence. Um.