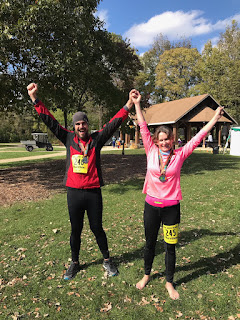 Last year I had surgery to repair a torn labrum and fix an impingement in my right hip. Now that's done, it was time to try a marathon again.

I signed up for what was a sure thing, the Des Plaines River Trail marathon. DPRT is a lovely, flat crushed gravel trail in the northern suburbs, offering half marathon, full marathon and 50-mile distances. I ran this race run three years ago and absolutely loved it. I convinced my running buddy Shaun to sign up with me.

When it came time to train for the race back in June, I hesitated, to put it mildly. There were personal things happening at the time and I felt overwhelmed. Expending the time and energy on training for a marathon -- this would be my ninth -- seemed frivolous.

I mentioned this to Shaun on one of our many obscenely early morning runs and he said simply, we'll get through this together. Running friends are great that way.

The ego boost of a comeback marathon took a backseat to running and focusing on training as therapy for me, physically and emotionally. I ran, biked, lifted weights and did yoga all through the summer. It was a good summer. I felt physically strong.

I also focused on losing weight, and am now down close to 25 pounds since May. Menopause sucks in many ways, including adding "fluff" to my waistline over the last year. I like to joke that I've lost a toddler.

In September, as our runs became longer and longer, my old back issues began to flair up. Spasms and pain were with me nearly daily. Shortly after the final 20-mile run three weeks ahead of tapering for the race, my back was a complete mess. Those three weeks were miserable. I visited my old sports chiro, who did adjustments, but the pain kept returning. UGH.

The week before the race, I wasn't nervous about it, just about calming down my back so I could run OK. That's when our email inboxes were lit up by race director emails warning us about flooding on the course and possible re-routes. I was "meh" about it, figuring they'd figure it out.

By the end of the week, the alarmist emails had wormed their way into our nerves and fueled our jitters.

That cool morning, as racers stood around open fire pits (soooo nice) to stay warm, that's all we talked about -- how the course had been re-routed so that we would run four 6.55-mile loops (the 50-milers would do eight loops, omg) and that we would still be running through standing water, some areas up to half a foot deep. !!!!!

Another running friend had previously advised duct-taping our shoes, so we did. No one else at the race did, and we got a lot of comments and questions -- to which we readily responded that we had no clue what we were doing. 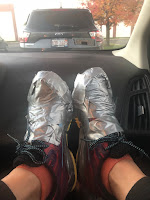 Finally, we were off. It was a gorgeous morning, sunny with frost blanketing the earth and temps in the 30s.

We encountered our first water crossing a half mile in, and then another, and more. Then we turned around and ran back through the five we just ran through. We were soaked nearly up to our knees, and parts of our upper legs and shirts as other runners tore  by us and splashed us. The water was freezing. I thought, oh my god, we have to do this THREE MORE TIMES? 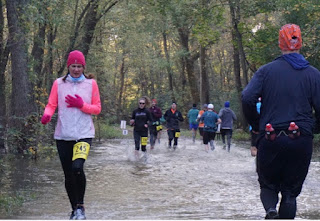 As I continued the first loop, there fortunately was only one more water hazard just past a bridge over the Des Plaines River and then several dry miles -- though my feet wouldn't be dry again until the end of the race.

Shaun is faster than me, so I was solo a lot of the time. We would wave and/or hug as we'd pass each other in loops. The second loop was probably the toughest, now knowing what lay ahead of me and that I'd have to run more loops of this. My back was growling but as long as I kept moving, it wasn't too bad.

Finally, I began the last loop, the sun high in the sky. I felt happy, or at least happier. Other marathoners and I grinned at each other, knowing we were near the end. I made an extra effort to cheer on the 50-milers, who would be slogging on long after I was done.

Shaun and I found each other and ran the last five or so miles together. He was not cheerful and just wanted to get the damn thing done, his words, which I was fine with. Some friends of his came to cheer him on that final lap, and it was so nice to hear people cheering for us. I also ate part of a turkey sandwich that final loop, and it was fantastic.

As soon as I crossed the finish line, I couldn't take off my soggy shoes and socks fast enough. One of my ankles was bleeding a little, but miraculously I had no blisters. We grabbed food and beer with Shaun's super nice friends Morgan and Tim and we were done for the day.

My legs were a little sore but fine over the next few days. But my back woke up screaming the next day and by Monday I could barely focus on anything, the spasming was so bad. It was as bad as it gets.

I found a new chiropractor in my neighborhood, a really wonderful woman, who helped to slowly calm it down, and I got back into my sports doc. I started physical therapy just yesterday, six days after the race, and already am feeling much better.

For the challenging course, my time of 5:30 was just fine -- and even a few minutes faster than the last marathon I ran in 2016 in Kenosha, when I was pretty injured and before I had surgery. I'm 50, and dammit, I just ran a marathon!